Post card exchanges, pen pals, e-mail pals, skype pals – there are so many ways to stay connected with people who live around the globe.  When we decided to move to Morocco, we set my oldest son, Kal, up with a pen pal in Morocco who was the same age as he was.  I can’t tell you how much it helped him to have 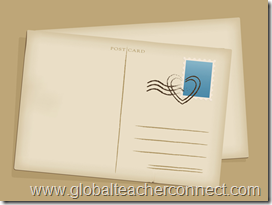 someone on his own wave length to communicate with.  Since arriving, we have also met up with his pen pal, and they became friends, further easing the transition.

So, I was thinking recently about how to use these types of strategies in my homeschooling ventures and in my classroom next year.  I want to give my children (at home and at school) a real life connection to writing.  I also want to give them a chance to converse with people from all around the world.  Now, I love technology, but I’ve decided that although I love technology and e-mail is great, receiving “real” mail is just too exciting for kids to take this concept totally offline.  So, instead of just sending e-mails, I would like to start up a post card exchange, with anyone, anywhere who would like to be involved.

I have a 4 year old and an 8 year old who LOVE to write post cards.  If you have a child (or a class full of children) in the 4-9 year old age range, leave an address as a comment – or send your address to my email: , and we’ll send you a post card.  On the post card, will of course be our return address, and we’d LOVE to get a post card in response.  Then, periodically, I’ll post little updates here on Global Teacher Connect about where we’ve received post cards from.  If enough people are interested, perhaps we will eventually work out a web, or a more intricate, plan, but here’s a start.  Who’s interested?

Grab This Widget Posted by Heidi Raki at 3:53 PM