Glitter is the Herpes of Craft Supplies

Have you ever heard the expression: Glitter is the herpes of craft supplies?  Truer words were never spoken.  While I don’t dislike glitter as much as some of my cohorts (I have a teacher friend who is literally AFRAID of glitter), I do like to avoid it for most of my kids’ crafts.
This craft, however, was unavoidable.  Our school was having our annual fundraising carnival and this year’s theme was, “Somewhere over the Rainbow.”  Each class was given the task of creating a game booth.  One of my wonderful parent helpers suggested we do a ruby red slipper theme.  I thought it was a GREAT idea and she thankfully took charge of planning the booth and informing all the parents of items we needed.
In the weeks that followed, students began bringing the items their parents signed up for.  Among the items were: red paint, previously worn women’s dress shoes, and red glitter… lots and lots of red glitter.  Oh boy.  Right away I started preparing myself for Decoration Day (or as I will now refer to it as D-Day).
D-Day arrived.  I had already planned in my head that my classroom could be considered a disaster area by the end of the day.  Had I not prepared myself, I think I would have literally gone insane.
In the end, the kids ended up doing a great job and were mindful of their cleanliness.  They were so excited with the finished products and had a blast with this activity.
Here are some photographs of the children and their ruby red slippers. 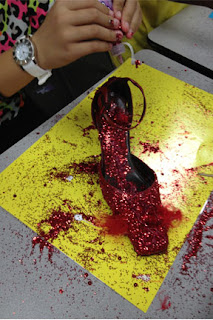 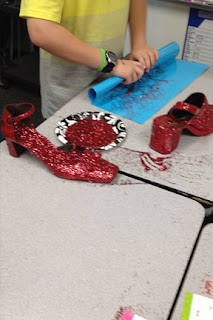 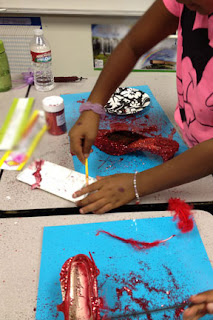 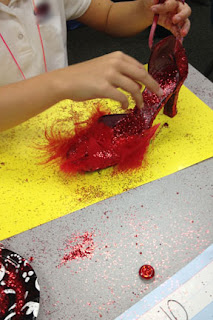 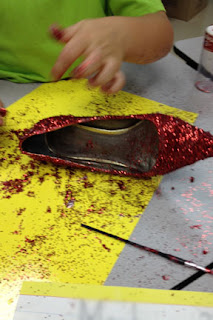 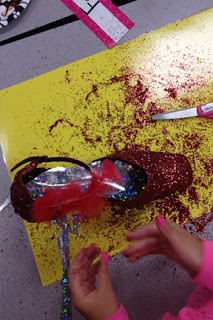 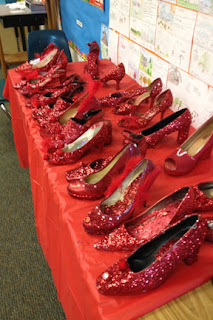 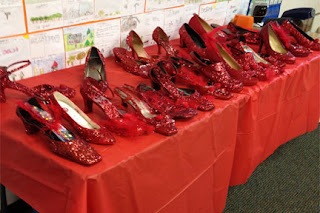 Grab This Widget Posted by The Resourceful Teacher.com at 5:26 PM

Email ThisBlogThis!Share to TwitterShare to Facebook
Labels: activities for kids, glitter activity, glitter is the herpes of craft supplies