Let's review some South America facts to help you to get acquainted with it, or simply to refresh some basic facts and figures as a manner of introduction.
The Western Hemisphere, or the Americas as they are commonly known, is composed by North America , Central and South America.
South America is the fourth largest continent in the world with aprox. 17,849,000 square km. (6,890,000 square miles) and a population of 371,090,000, estimated by 2005.
Connected through the isthmus of Panama to its northern counterpart, it is bordered by the Pacific ocean to the West and Atlantic ocean to the North and East. 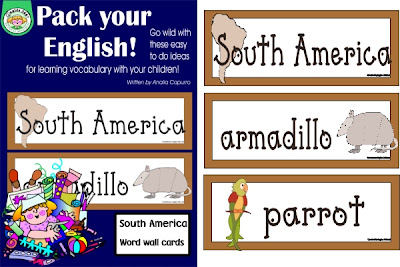 Download a free set of word wall cards in my  blog

Grab This Widget Posted by Ana at 1:00 AM