Last Friday, we had our annual California 49er Day celebration with both 4th grade classes. Forty-Niner day celebrates the historic event in the 1840's when the discovery of gold sent people from all over the world to California.  We spent the entire day with the students doing activities that the 49ers would’ve done.

In the morning, we spent time playing the Miner-Merchant game.  Half of the 4th grade students were miners and the other half were merchants.  The job of the merchants was to create a storefront (they did this for homework before 49er day) and sell items to the miners that they would need to be successful in “striking it rich.”  Some of the items were a pick, shovel, gold pan, pillow, blanket, tent, etc.  The merchants worked in pairs to come up with items they wanted to sell and price those items, remembering they are in competition with other merchants selling their goods.

The miners were given a set amount of money, given a list of items they should purchase, then shopped for their items.  Miners were told to use smart shopping strategies like price comparing from all the merchants before making purchases.

At the end of the game, the merchants who made the most money won the game and the miner who purchased the greatest amount of goods won also.  Here are some photographs of the Miner-Merchant game. 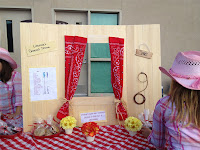 After distinguishing the winners of the game, the students rotated through a series of 8 activity booths:
1. Line Dancing
2. Photo next to a pony
3. Craft - create a necklace
4. Gold Panning
5. Cow Roping
6. Relay Races
7. Sling Shots
8. Making Beef Jerkey

They spent about 12-15 minutes at each activity booth. When the day was over, the students received goody bags and a frame with their picture next to the pony.  It was a great day.  Luckily we had many parent volunteers who stayed for the entire day to help!

Grab This Widget Posted by The Resourceful Teacher.com at 5:30 AM