As with most schools – my school is preparing for next year, which includes making school supply lists for incoming parents.  Here’s what’s on the list for my first graders to bring next year: 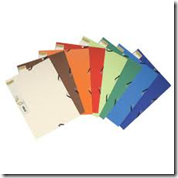 receiving in the United States.  For example the chemise de papier was very different to me than a folder as I knew it.  Both are used to hold papers (I use mine to send home graded papers), but rather than having the pockets I was familiar with, this has elastic that goes around the outside and holds it all together.  The absence of crayons was also interesting to me – while you can find “wax crayons” here in Morocco, they are rare - colored pencil are the norm and the expectation.  Construction paper is another item that is very hard to find here in Morocco – instead, we have Canson Paper, which is heavy and more like cardstock.  We also do not receive hand sanitizer or baggies, which were “normal” on supply lists I had in the United States.  After a year of teaching with these “different” supplies, I have found that at the end of the day, as long as you have something to write with and something to write on – the rest doesn’t really matter!!

Now, I teach at an “American School” here in Casablanca, Morocco.  My son attends a “Moroccan School”.  Next week, I’ll tell you about his school supply list!

While we’re talking about school supplies – what’s on your school supply list for next year?

Grab This Widget Posted by Heidi Raki at 3:05 PM