I’m Learning How to Read

1.  Different variations of a letter don’t look the same until you train your brain to see them that way.  When I began working on the alphabet, my husband pointed at two letters and called them both the same letter - Ghayn  - he couldn’t figure out why they didn’t look like the same letter to me.  I couldn’t figure out how they looked the same to him.  (In Arabic, there are no Capitols a 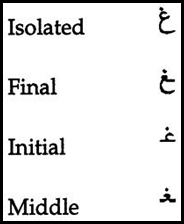 nd Lowercase, rather the letters look different depending on where they are in a word.)  Then, it occurred to me that a capitol A and a lowercase a really don’t look like they belong together at all.  The only reason we know that these letters are the same is that we have train our brains to see them both as the same thing.

2.  I can sound out words very well, but have no idea what that word means.  I have taught long enough to know about the word calling phenomena is common, but I never truly understood it until I sounded out this great, long word in Arabic and realized that it head no meaning to me whatsoever.  Now, when that word is next to a picture, or written in a place in my notebook that helps me remember what it means, I’m good, but written in a random place in a book, and I’m lost!

3.  Handwriting is important.  In English, my handwriting stinks, and I’ve never really thought it was all that important, as long as it was legible.  However, I have realized that different handwritings can be like different fonts.  Just like the capitol A and the lowercase a don’t look like each other – different people’s a’s might also look different.  I can read the pretty, neat writing that my teacher uses, but have a harder time with my husband’s quickly written Arabic, or the fancy Arabic fonts that can be found on cereal boxes and billboard signs.

4.  Environmental print encourages reading.  Now that I can sound out

words, I am starting to make more sense of all these Arabic words that have been surrounding me for the past 9 months.  I see Arabic everywhere here in Morocco – street signs, billboards, packaging, books, etc.  However, much of the time, the Arabic words have corresponding French words, which are MUCH easier for me to figure out, so my eyes have pretty much skipped over the Arabic writing as a whole.  Now that I know what the letters are, my eyes are beginning to search for the Arabic and trying to sound out words everywhere.  (It’s actually driving my husband a little crazy – lol!)

Have you ever learned another language?  Share some of your experiences here.

Grab This Widget Posted by HeidiRaki at 3:33 PM

Click on the buttons below to visit the blogs of our contributing authors.

LMN Tree from the United States

La Profesora Frida from the Netherlands

Dilly Dabbles from the United States

Learning in Spain from Spain

Making It as a Middle School Teacher From the US

A Special Kind of Classroom from Canada

Chalk and Slate from Switzerland

The Reading Owl from the Phillipeans

The Resourceful Teacher from the United States

Lessons from the Middle from Canada